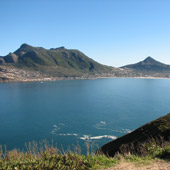 On the other side of the Klein Leeuwkoppie towering above Llandudno lies the bustling fishing village of Hout Bay, at just 22km from Cape Town. From its moonshaped beach and the lively harbour to the verdant valley leading up to the Constantia mountains, Hout Bay provides for a wonderful outdoor lifestyle.

The famous Chapmans Peak Drive, built between 1914 and 1919, is one of only three access road into Hout Bay. The scenic drive offers magnificent views of the blue waters of the bay, presided over by the majestic Mount Sentinel.

Hout Bay ("Wood Bay") was named by Jan van Riebeeck following his landing in the Cape in 1652, after the dense forests growing here.

Hout Bay has a booming crayfish and snoek industry, which started with the opening of a canning factory in 1904. Tourism however forms the main income of Hout Bay. There are numerous attractions: for the more adventurous there is hiking, sailing, surfing, kayaking, fishing and cycling, and for the laid-back a picnic on Chapmans Peak or suntanning on the beach.

The Sunday craft market is popular with Capetonians and visitors alike, whilst the World of Birds also attracts many visitors to its charming feathered residents. Regular boat trips to Seal Island depart daily from the harbour. 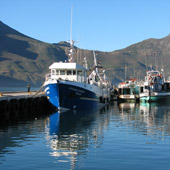 Hout Bay offers all amenities with a variety of shops, well known restaurants, vibrant pubs as well as all major banks and retail outlets.

There are a number of excellent schools in Hout Bay, including Kronendal Primary School and the International School.

What local residents still fondly call "the village" has grown considerably with many new apartments, houses and mansions. Many of them are holiday homes for people who initially came as tourists from overseas and enjoyed the relaxed lifestyle so much that they decided to buy a home here.